Jim Franco : Pursuit of the Essential

“When I hold one of my pieces, it just makes me happy,” says ceramicist Jim Franco. “It’s not just because I made it. It’s…I don’t know. They’re almost like worry beads. They have a calming quality.” Rendered in subtle shapes and featuring organic washes of color, Franco’s work has an undeniably comforting feel to it. He creates objects to live with, day in and day out: quotidian at its very best. “I don’t want my bowls to force themselves on people or on me,” he says. “I just want them to be beautiful and interesting in this quiet way.” 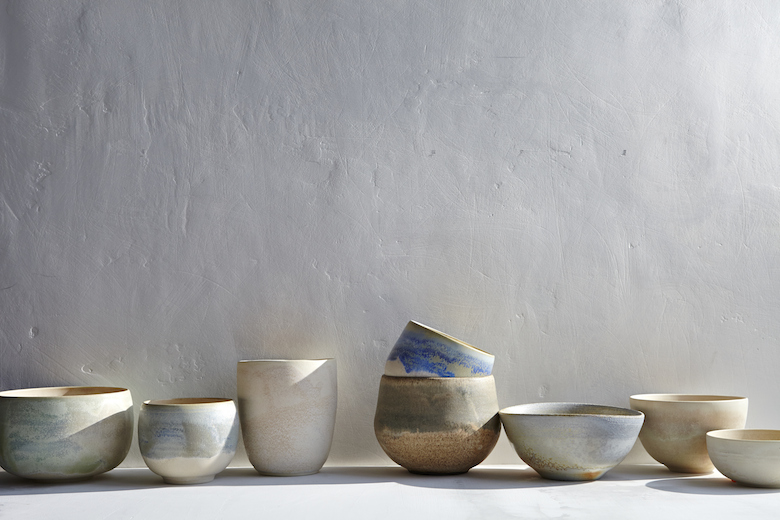 “I don’t want my bowls
to force themselves on people or on me,
I just want them to be beautiful
and interesting in this quiet way.”

There’s a parallel between the quality of the finished work and the process behind it: the Manhattan-based artist says the act of creating his pieces quiets and calms him. “When I’m at the wheel, it’s just the clay and me; there’s no one saying, ‘Maybe we want this shape—maybe make it taller, or thinner,’” he says. (Perhaps here is where we’ll note that Franco was for many years—and remains—a sought-after photographer, whose past clients include Conde Nast Traveler, The Plaza Hotel, the Hotel Habita Group, Starwood Hotels, and many others.) Although he remains active in both pursuits, Franco sounds more at peace—and more expansive, creatively speaking—when he discusses his ceramics. “With photography, you are creative in a very removed way,” he says. “And actually, the bigger you get, the more you are removed from doing it on your own. You become almost like a director. With clay, it’s a fun process to have no other input but my own. Plus, it just kind of feels good.” 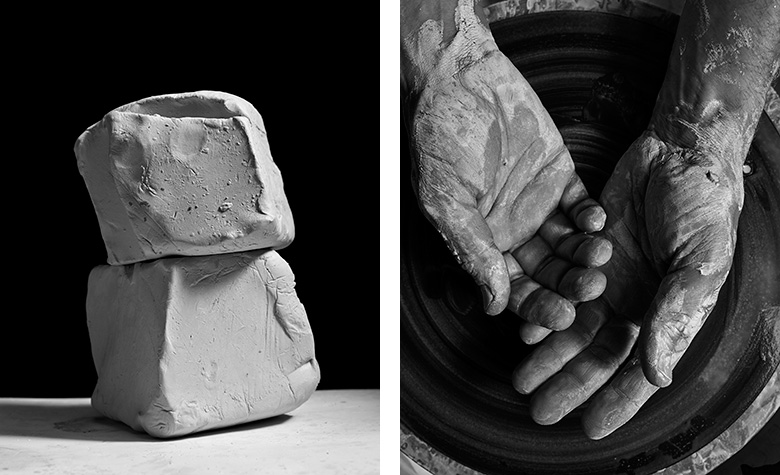 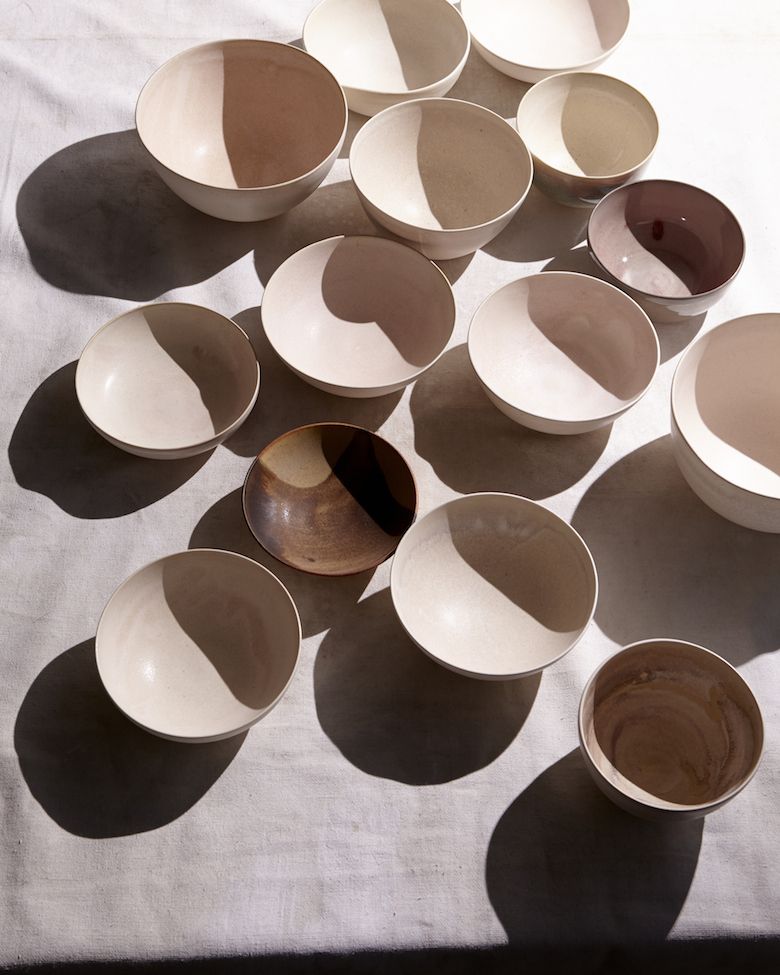 As different as the two disciplines might seem, Franco points out that there are real—and beneficial—crossovers. He’s only worked with pottery for two years—a remarkable fact, given his aptitude—and he attributes much of that talent to his life behind the lens. “I am happy with how my ceramic pieces are turning out,” he says. “I’m pretty sure it’s because of how I developed my aesthetic sense through photography. My greatest pleasure with photography is taking away the noise when I’m shooting. I think that’s also how I approach making my bowls. I don’t like a lot of stuff, or distraction.”

This pursuit of the “essential,” as Franco puts it, is prevalent in both his imagery and ceramics. Unadorned, simple shapes prevail in Franco’s work. Closer inspection reveals a shaping technique refined with considerable finesse. “I really like taking my time to craft a bowl, until I feel it is ready,” he says. “There’s a moment I love when the shape of the wall gets to have this beautiful slope, and I just need to finish off the bottom. I think I’m getting to the point when I can say, ‘Okay, that’s it.’ I actually find that’s the hardest thing—figuring out when to stop.” 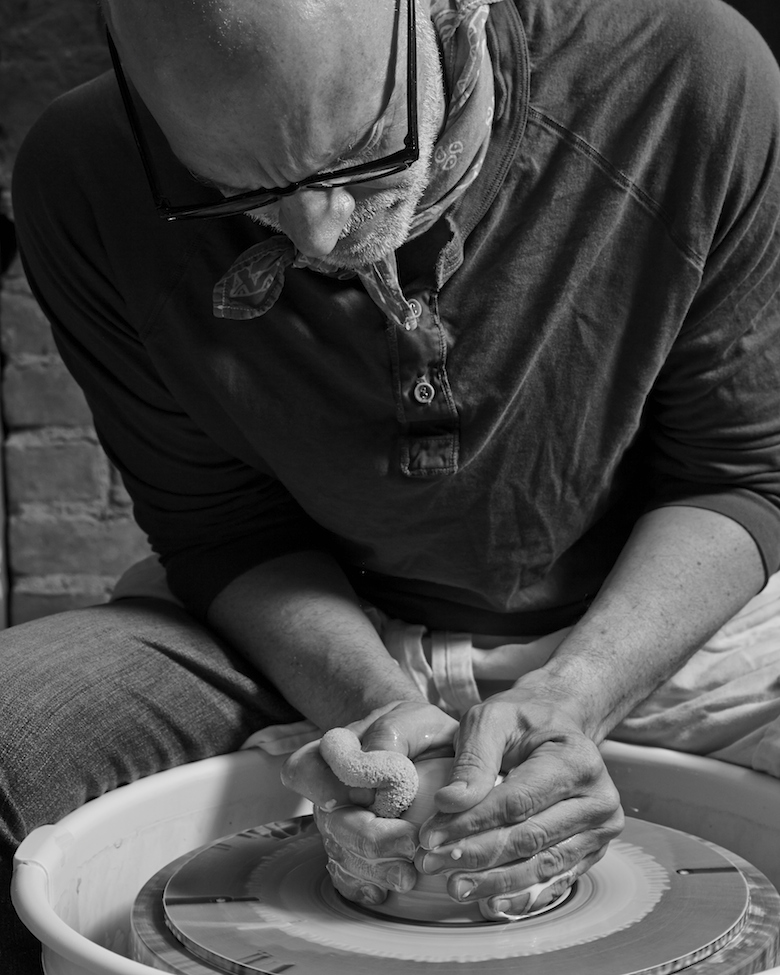 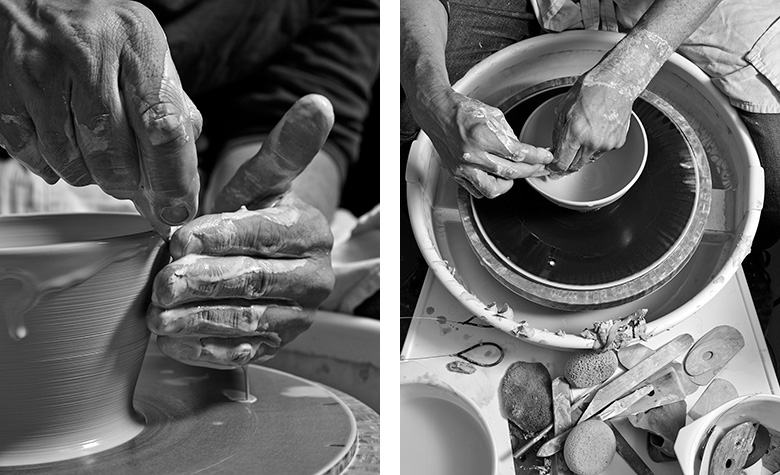 “Partly the reason
I’ve become passionate about ceramics
is that it is a surprise.
Some bad ones, some good ones.”

In terms of construction, Franco’s work has a perfectionist quality, but his finishing process rubs against this. “I like my shapes to be sophisticated but my glazes to not be very polished,” he says. “I like to see the hand in the work.” To accomplish this, he double-glazes many of his pieces, a process that creates mercurial color gradients—striking or subtle, depending on the perspective. Although the base glaze is fairly uniform, a second overlay of a new color, deposited by paintbrush, can produce surprising results. “Partly the reason I’ve become passionate about ceramics is that it is a surprise,” he says. “Some bad ones, some good ones.” 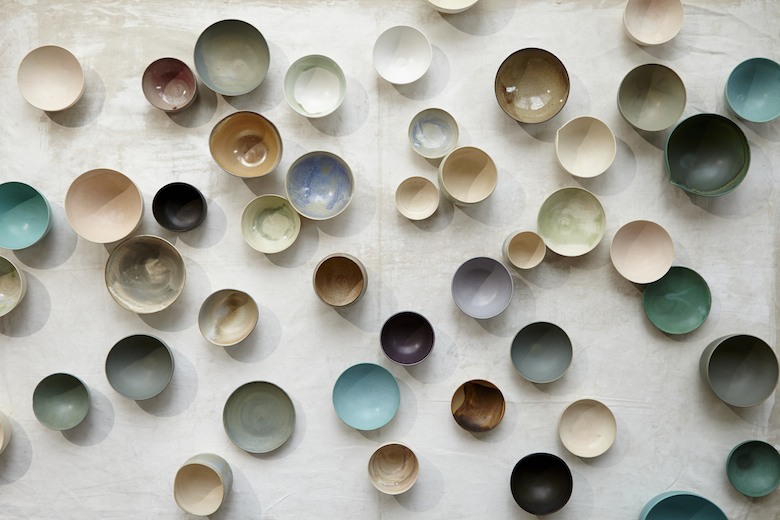 Franco recently experienced one of those “good” ones. “I have this one bowl, a simple white bowl with a satin finish,” he says. “When I finished it I thought, ‘Wow, that’s me.’” He shakes his head. “I don’t need anyone to say, ‘Oh, that’s a Jim Franco bowl.’ I really don’t care. But it felt like me: just existing, quietly.”

“I have this one bowl, a simple
white bowl with a satin finish. When I finished it
I thought, ‘Wow, that’s me.’
It felt like me: just existing, quietly.” 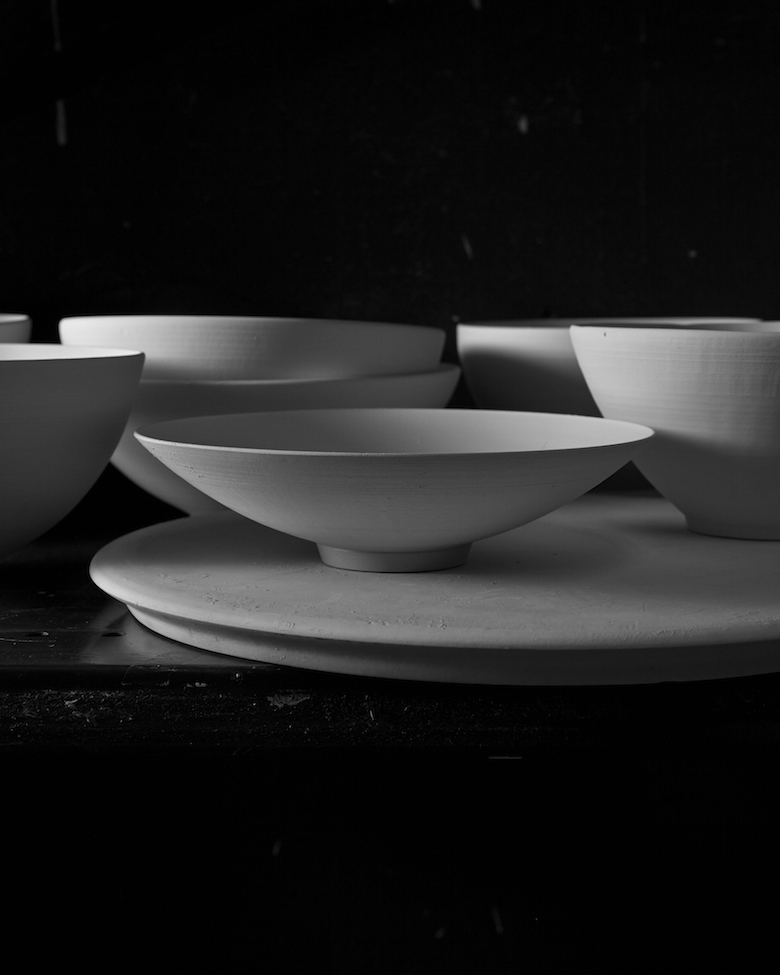 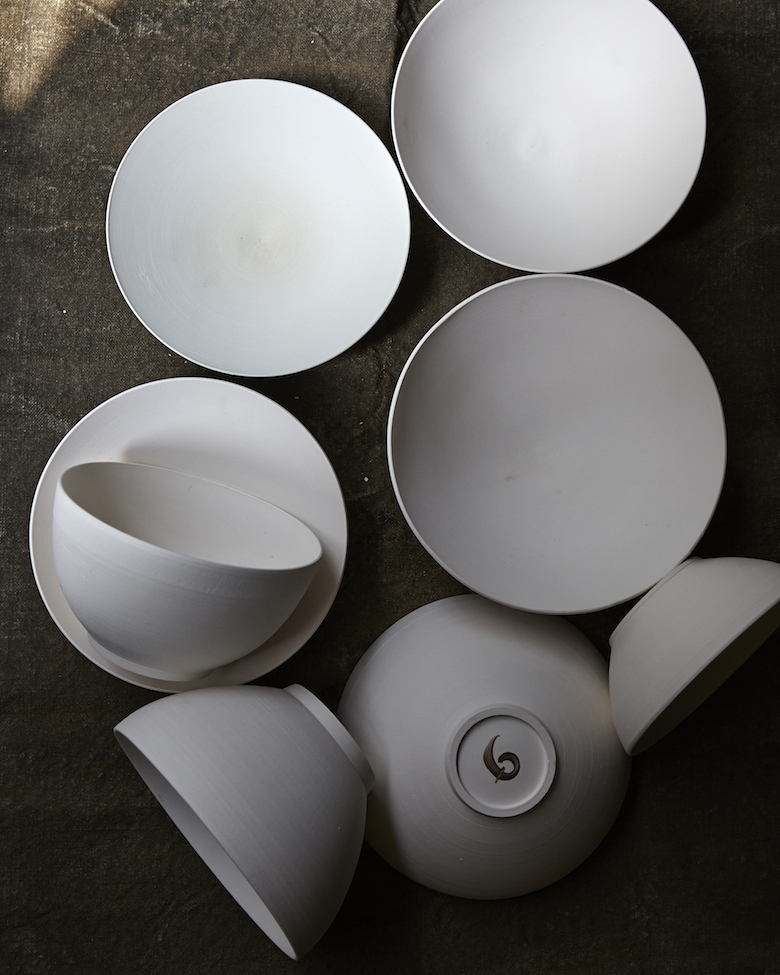 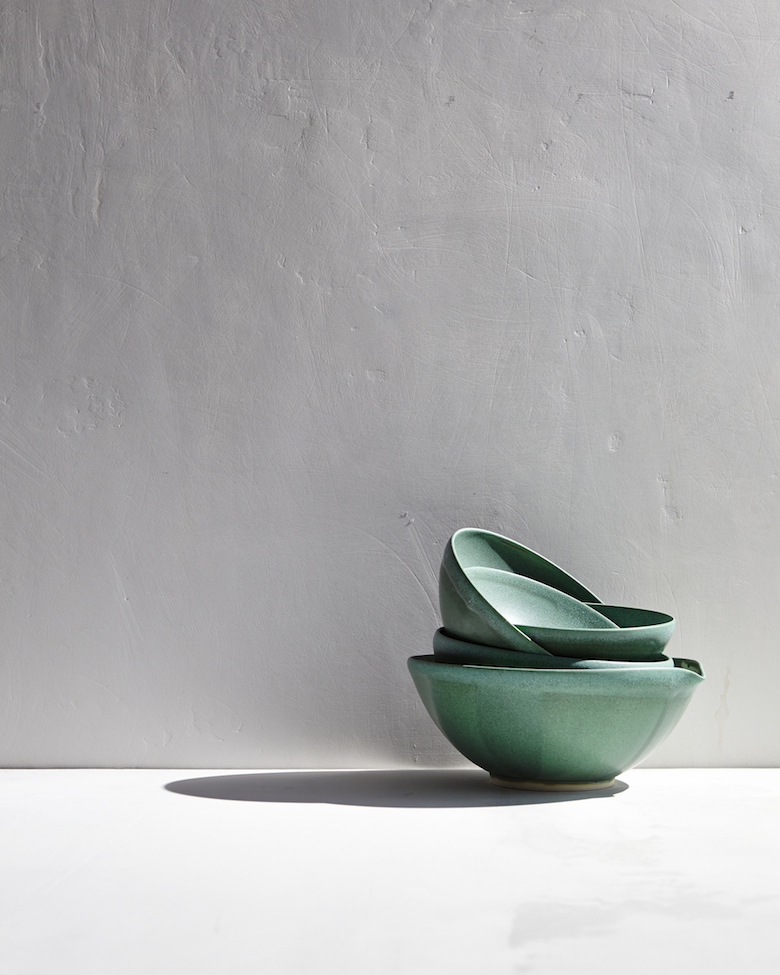 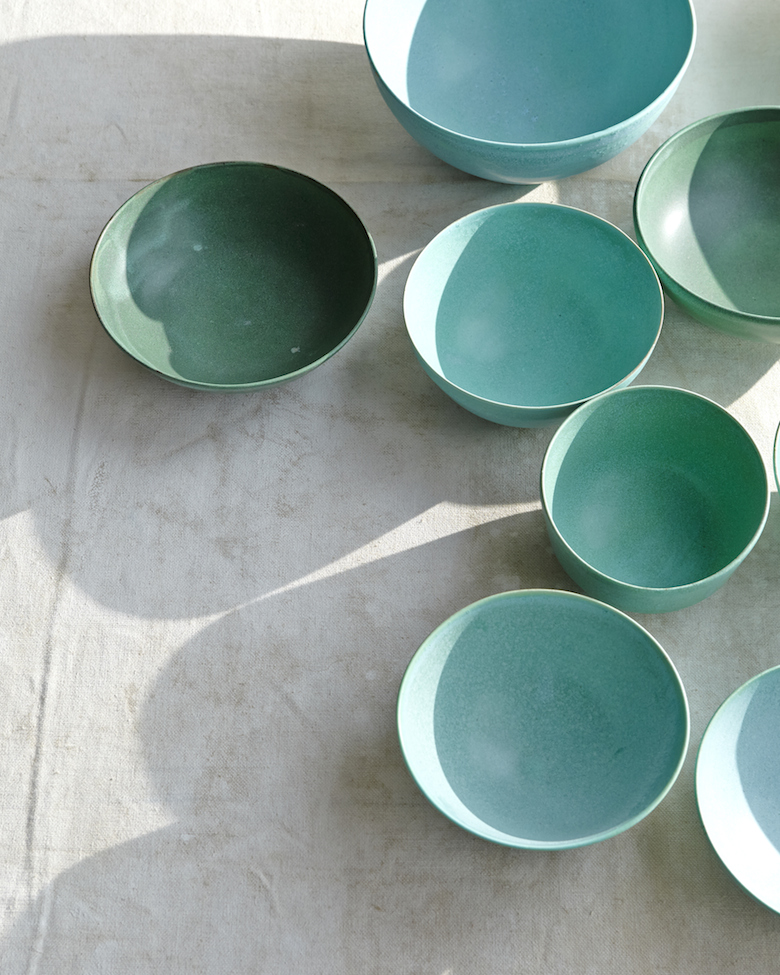